A father’s relationship with his children is a legal right. Whether you’re seeking to obtain full custody or joint custody with the child’s mother, putting forth the right plan of action can result in success. There is no magic spell for getting custody as a dad, but having an understanding of state laws and a reasonable plan of action can help. Knowing what to avoid doing and where to put your focus can be the deciding factors in your case. 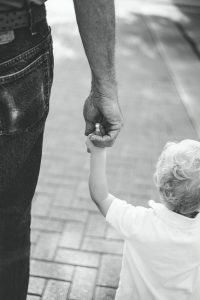 How to Get Custody as the Father

Many people believe it’s significantly more difficult for a father to get custody of his children, but this isn’t always the case. Fathers fighting for custody tend to make similar mistakes that can lead them to a lack of success, but working with the right attorney and implementing a thoughtful strategy can make all the difference. Here are some early steps to take based on what we’ve seen in past cases.

Forget What You Think You Know

There is a widespread belief that California family courts hold a bias against fathers. Our results show otherwise. Avoid bringing that doubt and negative thinking to your fight. Fathers who use a perceived bias in their argument in court tend to get adverse results. In fact, the law specifically outlines that both parents share favorability, and the determining custodial factors are based only on what’s in the best interest of the child. Don’t back yourself into a corner with the notion of a bias; it will become a distraction in court and will likely work against you. At the very least, it won’t help your case.

Decide on a Custody Agreement Worth Fighting For

Be clear about what kind of custody agreement you’re seeking. Joint and full custody (or sole custody) are different beasts, and knowing those differences is imperative.

If you request full custody, you’ll have to provide the judge with a clear explanation of why you believe you alone are the best option for the child’s care. Is the mother unable to meet the child’s needs? Respectfully outline how. What makes you unequivocally the best one to take care of the child? This is what the judge will want to know. If you request joint custody, the focus is on how your role is important in combination with the mother’s to provide the best care.

If neither parent is a danger to the child, joint custody is typically the most reasonable approach. However, a father should seek sole custody if the mother denies any attempts to co-parent, makes derogatory statements about the father in the presence of the child, makes false claims of abuse, or is neglectful herself.

Focus on the Best Interest of the Child

Since you won’t be citing any assumed biases against fathers in your case for custody, you can redirect that energy into building a case based on how your child will thrive in your care. An important component of this is the quality bonding time a father is able to spend with the child. Your child should be comfortable and happy to spend time with you; he or she should feel safe in your care and trust that any needs will be met. The environment a father creates for his child should be age-appropriate and encourage growth, education, and development. A father should also work hard to ensure the child’s relationship with the mother isn’t negatively impacted by his care. Consistency is important, too. Ensuring that the child has some routine and knows what to expect in daily life can help during this adjustment period.

Get Ahead of Potential Challenges

If you didn’t spend much time at home while you were married, chances are you’re not going to be able to demonstrate a bonded relationship with the child, which can make your case for custody a difficult one. It can also challenge the terms of the custody agreement, which addresses the ratio of a joint custody split. If getting custody is a priority, you should ensure you’re not diluting visitation time with extended relatives or sending the child to daycare for long periods. The bonding process is important, so you should ensure the child is excited or at the very least comfortable about seeing you and visiting your home.

Being cooperative and collaborative with the child’s mother might prove to be a struggle, but a father after custody will need to demonstrate effective communication skills and be putting forth a valiant effort to show the court that he can do his part to co-parent. It’s common for fathers to back off if the mother refuses to cooperate, and this is a big mistake. Regardless of whether a father gets full or joint custody, it is often in the best interest of the child to maintain a relationship with the mother, even if it’s a challenge for the father.

Your fight for custody should always be rooted in providing what’s best for the child. Divorce can be an emotional time for everyone involved, but the parents have a responsibility to stay as level-headed as possible in a custody agreement, so that arguments and feelings don’t get in the way of health, safety, and well-being. There are many factors to consider in determining the best interest of the child and what custody arrangement you will seek in court. Remember to remain respectful and collaborative and make your child your priority. Don’t let an assumed bias against fathers keep you from taking the right steps; avoid feeling defeat before you even begin your fight.